Group makes its protests a work of art 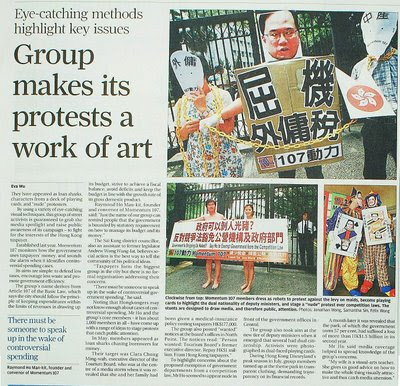 They have appeared as loan sharks, characters from a deck of playing cards, and "nude" protesters.

By using a variety of eye-catching visual techniques, this group of street activists is guaranteed to grab the media spotlight and raise public awareness of its campaign - to fight for the interests of the Hong Kong taxpayer.

The group's name derives from Article 107 of the Basic Law, which says the city should follow the principle of keeping expenditures within the limits of revenues in drawing up its budget, strive to achieve a fiscal balance, avoid deficits and keep the budget in line with the growth rate of its gross domestic product.

Raymond Ho Man-kit, founder and convenor of Momentum 107, said: "Just the name of our group can remind people that the government is bounded by statutory requirement on how to manage its budget and its money."

The Sai Kung district councillor, also an assistant to former legislator Andrew Wong Wang-fat, believes social action is the best way to tell the community of his political ideas.

"Taxpayers form the biggest group in the city but there is no formal organisation addressing their concerns.

"There must be someone to speak up in the wake of controversial government spending," he said.

Noting that Hongkongers may not know enough about cases of controversial spending, Mr Ho and the group's core members - it has about 1,000 members in all - have come up with a range of ideas to stage protests that catch public attention.

In May, members appeared as loan sharks chasing borrowers for money.

Their target was Clara Chong Ming-wah, executive director of the Tourism Board, who was at the centre of a media storm when it was revealed that she and her family had been given a medical-insurance policy costing taxpayers HK$177,000.

To highlight concerns about the proposed exemption of government departments from a competition law, Mr Ho seemed to appear nude in front of the government offices in Central.

The group also took aim at the new tier of deputy ministers when it emerged that several had dual citizenship. Activists were photographed as dual-faced playing cards.

During Hong Kong Disneyland's peak season in July, group members turned up at the theme park in transparent clothing, demanding transparency on its financial records.

A month later it was revealed that the park, of which the government owns 57 per cent, had suffered a loss of more than HK$1.5 billion in its second year.

"My wife is a visual-arts teacher. She gives us good advice on how to make the whole thing visually attractive and thus catch media attention."
張貼者： 何民傑 於 上午12:29 沒有留言: 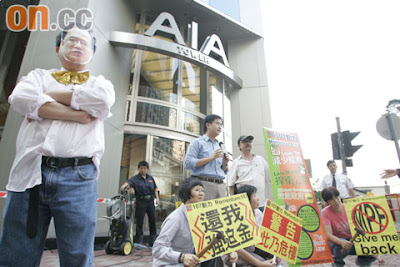 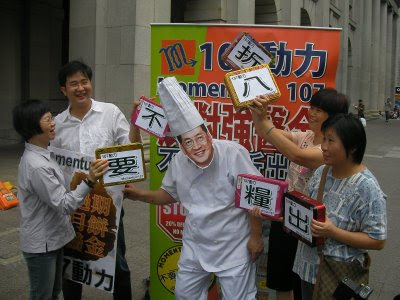