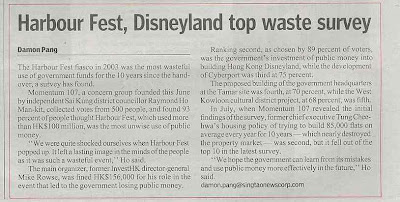 The Harbour Fest fiasco in 2003 was the most wasteful use of government funds for the 10 years since the handover, a survey has found.

Momentum 107, a concern group founded this June by independent Sai Kung district councillor Raymond Ho Man-kit, collected votes from 500 people, and found 93 percent of people thought Harbour Fest, which used more than HK$100 million, was the most unwise use of public money.

``We were quite shocked ourselves when Harbour Fest popped up. It left a lasting image in the minds of the people as it was such a wasteful event,'' Ho said.

The main organizer, former InvestHK director-general Mike Rowse, was fined HK$156,000 for his role in the event that led to the government losing public money.

Ranking second, as chosen by 89 percent of voters, was the government's investment of public money into building Hong Kong Disneyland, while the development of Cyberport was third at 75 percent.

The proposed building of the government headquarters at the Tamar site was fourth, at 70 percent, while the West Kowloon cultural district project, at 68 percent, was fifth.

In July, when Momentum 107 revealed the initial findings of the survey, former chief executive Tung Chee- hwa's housing policy of trying to build 85,000 flats on average every year for 10 years - which nearly destroyed the property market - was second, but it fell out of the top 10 in the latest survey.

``We hope the government can learn from its mistakes and use public money more effectively in the future,'' Ho said. damon.pang@singtaonewscorp.com
張貼者： 何民傑 於 凌晨2:58