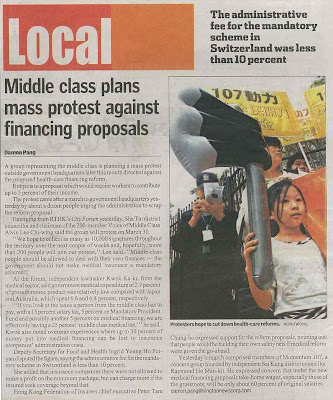 A group representing the middle class is planning a mass protest outside government headquarters later this month directed against the proposed health-care financing reform.

It objects to a proposal which would require workers to contribute up to 5 percent of their income.

The protest came after a march to government headquarters yesterday by about a dozen people urging the administration to scrap the reform proposal.

``We hope to collect as many as 10,000 signatures throughout the territory over the next couple of weeks and, hopefully, more than 200 people will join our protest,'' Lee said. ``Middle-class people should be allowed to deal with their own finances - the government should not make medical insurance a mandatory scheme.''

At the forum, independent lawmaker Kwok Ka-ki, from the medical sector, said government medical expenditure of 2.7 percent of gross domestic product was relatively low compared with Japan and Australia, which spent 6.6 and 6.4 percent, respectively.

``If you look at the taxes a person from the middle class has to pay, with a 15 percent salary tax, 5 percent on Mandatory Provident Fund and possibly another 5 percent on medical financing, we are effectively having a 25 percent `middle class medical tax,''' he said. Kwok also noted overseas experiences where up to 30 percent of money put into medical financing can be lost to insurance companies' administration costs.

Deputy Secretary for Food and Health Ingrid Yeung Ho Poi- yan disputed the figure, saying the administrative fee for the mandatory scheme in Switzerland is less than 10 percent.

She added that insurance companies there were not allowed to make a profit on the minimum package, but can charge more if the insured seek coverage beyond that.

Hong Kong Federation of Insurers chief executive Peter Tam Chung-ho expressed support for the reform proposals, pointing out that people would be building their own safety nets if medical reform were given the go-ahead.