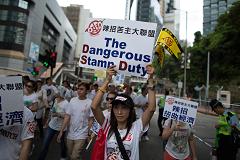 A combination of slowing demand from mainland Chinese buyers, higher interest rates and tight property restrictions could present a perfect storm for Hong Kong's real estate market, according to an economist at HSBC.
Housing prices in the Asian financial capital, which have skyrocketed in recent years, could correct 10-20 percent as a result, said Frederic Neumann, Co-head of Asian Economics at the bank.
"I think the [cooling] measures that we've seen imposed certainly put a dampener on the market. But if you look ahead there are also other headwinds coming in, a China slowdown is certainly going to weigh on property prices," Neumann told CNBC Asia's"Squawk Box" on Monday.
"And we have higher U.S. dollar interest rates [which] directly feed into Hong Kong as well," he added. Hong Kong's monetary policy mirrors that of the U.S. given its currency peg to the greenback.
(Read More: Is the Heat Off Asia's Hottest Property Markets?)
If transaction volumes, which have fallen sharply in the recent months, continue to remain under pressure, property prices could follow suit, Neumann said. Residential transaction volumes totaled 4,276 units in May, down 49 percent from 8,349 in the year ago period, according to Hong Kong's Land Registry.
"Usually prices follow transactions, so if transactions remained as depressed as they have been, a 10 to 20 percent correction in some segments of the market cannot be ruled out, especially in the top end of the market," he said, noting that this decline would take place over the next one to two years.

Hong Kong has seen an unprecedented rise in residential property prices in the recent years, soaring 120 percent since 2008, supported by record low interest rates and demand across the border in China. Given its sky-high property prices, the city is ranked as the 10th most expensive city for expatriates in Asia, according to expatriate management firm ECA International.
Mainland buyers have been a key source of demand in the city's luxury housing market, accounting for almost 35 percent of the segment's purchases in 2012, according to HSBC. However, their share in the high-end property market declined to over 15 percent in the first quarter of the year driven by a raft of tightening measures.
(Read More: Chinese Buyers Flee Hong Kong for Overseas Property Markets)
In February, the government doubled the stamp duty or sales tax on all property transactions over $2 million Hong Kong dollars ($257,894) to 8.5 percent from 4.25 percent to deter speculative investments and stabilize prices.
Over the weekend, thousands of real estate agents in the city protested against the government's cooling measures, saying property curbs are threatening their business.
(Read More: Hong Kong Has World's Most Expensive Retail Space: Report)
Hong Kong property developers have been under pressure this year, with Sun Hung Kai Properties and Cheung Kong Holdings down 16.2 percent and 13.9 percent, respectively, since the start of 2013.
"Property has supported up to 40 percent of Hong Kong's economic momentum since 2008, and a meaningful share of equity market performance too…downside risks facing Hong Kong's domestic economy are on the rise," HSBC wrote in a recent note.
—By CNBC's Ansuya Harjani
張貼者： 何民傑 於 凌晨1:58